As you might already know, our red wolf brothers were moved to another facility (click here to read the post) so that we could get two new wolves that will hopefully breed (click here to see a picture of our new male, and here to see a movie of Kristen picking up our new female). Kim Wheeler, the director of the Red Wolf Coalition, helps to occasionally take care of the brothers at their new home on the Alligator River National Wildlife Refuge. She keeps in touch with Sherry to discuss information about the red wolf breeding program, as well as other things, so she is no stranger to us.

I was suprised to see Kim at the Helen Thayer event a while back, but it was good to catch up with her. I was excited when she told me she had recently taken care of our brothers, and I asked how they were doing. She said they were doing great, and that “blind wolf” in particular had adjusted really well to his new surroundings. She also told me that “alpha wolf” enjoys checking anything out that Kim has messed with. For instance, he comes and takes a drink of water as soon as Kim steps away after cleaning and refilling the bowl. This isn’t suprising since alpha wolf used to be so quick about coming to check out his new enrichment every day when he was living at the museum. You can read more about that, and see a video, here.
Kim seems to be smitten with our brother wolves, and we can all see why. They were both amazing and truly enjoyable animals, and all the keepers were sad to see them go. Just recently, Kim sent me some pictures to share with the other keepers, and in the same email she said,”No matter how many wolves you guys get, these two will always be the Durham boys to us here”. That was really nice to hear considering we feel the same way: they will always be remembered as being some of the coolest wolves ever, no matter how many we get in the future. I guess it’s easy to forget how much you miss something until you see it again, and I instantly teared up when I saw their pictures. 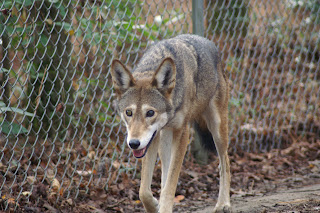 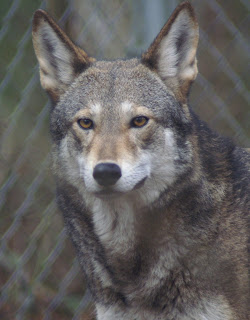 4 responses to Update on our red wolf brothers